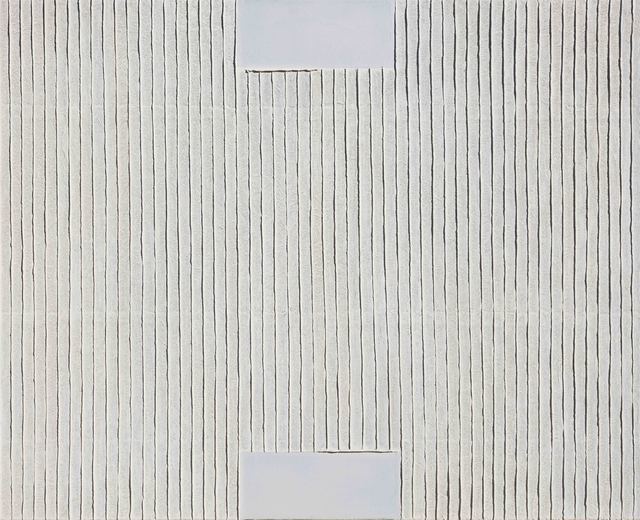 "An artist must reflect on one's own time period, not encompassing a sense of historicity."¹ These are the words of 88-year old Park Seo-Bo, a seminal figure in modern Korean art who continues to create his painstakingly labor intensive paintings to this day. Born in an age interrupted by the Korean War, Park became known for his three part Ecriture (Fr., "writing") series, in which he rakes a pencil through layers of oil paint on canvas. This repetitive pattern is meditative both for the artist to create and for the viewer to observe. In an interview with The Korea Times², Park described his Ecriture series as a means to empty himself, and analogously, the paintings attempt to convey the ideal of emptiness or "no mind."

The concept of emptying oneself became particularly poignant in his third and final phase of Ecriture. Park remarked, "For 70 years, I was living in the Analogue Era. I was successful and very comfortable...[but] the 21st century was a transition into the Digital Era. I struggled and thought a lot about how I was going to survive as an artist..."³ In 2000, Park saw the daily stressors that digitalization brought—not unlike the tumultuous political period he grew up in—and recognized his art as a therapeutic means to "heal the minds of people just like nature does."⁴ He began incorporating color, adding life to his paintings that he had previously avoided while still adhering to his Dansaekjo (Kr., "monochrome") sensibility. The result is a body of artwork that is empty yet warm, unyielding yet empathetic.